In the October 2009 edition of “The Sneaker” magazine, Haruhi Suzumiya author Nagaru Tanigawa wrote a piece called “A Study in August” which related to the time loop arc known as “Endless Eight” which was ongoing in the 2009 anime edition of The Melancholy of Haruhi Suzumiya. It was later re-printed in the Haruhi novel fanbook in June 2011. Here is a translation of that piece. 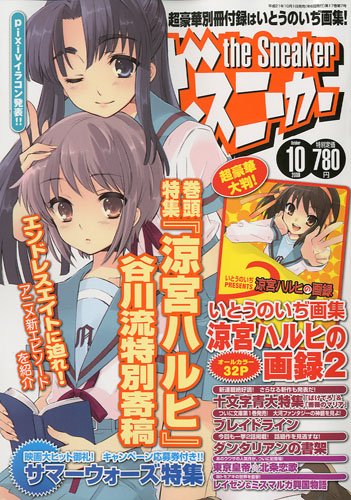 END_OF_DOCUMENT_TOKEN_TO_BE_REPLACED

This is the last in a batch of interviews from The Disappearance of Haruhi Suzumiya guidebook that I’ll be posting. Some of these were previously posted in 2011/2012 and I’ve gone back and edited them. This long interview is the final piece, and one that was previously translated. Credit goes to Yumeka for translating parts of the middle of this piece along with comments on the rest Please enjoy hearing about the first impressions from the three people who played the most important roles in the movie’s creative process!

END_OF_DOCUMENT_TOKEN_TO_BE_REPLACED

This is the fourth in a batch of interviews from The Disappearance of Haruhi Suzumiya guidebook that I’ll be posting. Some of these were previously posted in 2011/2012 and I’ve gone back and edited them. This roundtable is the first of two previously translated group pieces to provide details on how the visuals of the film were imagined. Please enjoy reading (again) about how directors Tatsuya Ishihara (General Manager), Yasuhiro Takemoto (Director), and Noriko Takao (Unit Director) came to conceive how to depict the original novel in animated form!

END_OF_DOCUMENT_TOKEN_TO_BE_REPLACED

This is the third in a batch of interviews from The Disappearance of Haruhi Suzumiya guidebook that I’ll be posting. Some of these were previously posted in 2011/2012 and I’ve gone back and edited them. This short interview is the first of three previously translated pieces with some edits for readability. Please enjoy hearing from the original designer of the Haruhi characters, Noizi Ito!

END_OF_DOCUMENT_TOKEN_TO_BE_REPLACED

This is the second in a batch of interviews from The Disappearance of Haruhi Suzumiya guidebook that I’ll be posting. Some of these were previously posted in 2011/2012 and I’ve gone back and edited them. This dialogue is the second of two newly translated pieces to provide more behind the scenes information regarding the animation process. Please enjoy hearing from the two major chief animation directors of the film, Shoko Ikeda and Futoshi Nishiya!

END_OF_DOCUMENT_TOKEN_TO_BE_REPLACED

This is the first in a batch of interviews from The Disappearance of Haruhi Suzumiya guidebook that I’ll be posting. Some of these were previously posted in 2011/2012 and I’ve gone back and edited them. This short interview is the first of two newly translated pieces to warm up to the series. Please enjoy hearing about the voice cast’s director in the booth, Youta Tsuruoka!

END_OF_DOCUMENT_TOKEN_TO_BE_REPLACED

In 2005, Kadokawa Shoten greenlit an anime adaptation of an increasingly popular novel series that was thought to be nearly unadaptable. While the series was critically acclaimed, there were issues adapting a series that had many short stories and basically had the climax of the series in the first novel. Planners Wada and Udagawa were able to convince Yoko Hatta to sign on and adapt the set of novels into a TV show, inking director Tatsuya Ishihara and series director Yutaka Yamamoto to lead the production with the author Nagaru Tanigawa providing assistance. Tanigawa proposed from the start to adapt it in achronological order, which was combined with Ishihara’s desire to finish with the final portion of Melancholy. Yamamoto made the decision to lead with a student-made film and the hit was born on April 2, 2006 when The Adventures of Mikuru Asahina: Episode 00 started the first series of the Haruhi Suzumiya anime.

2013 was the anniversary marking the tenth year the Haruhi Suzumiya novel series first went into print. Likely, Kadokawa wanted to release two items during that year: a pachinko collaboration with Sankyo that had been in the works since 2009 at minimum, and a re-release of the 14 episodes that aired in 2006 as they were broadcast (which had never been released before in Japan). Due to circumstances that weren’t made public, both of these were pushed back to 2014 and on August 29, 2014, Kadokawa finally gave the 629 Japanese fans what they had been waiting for. 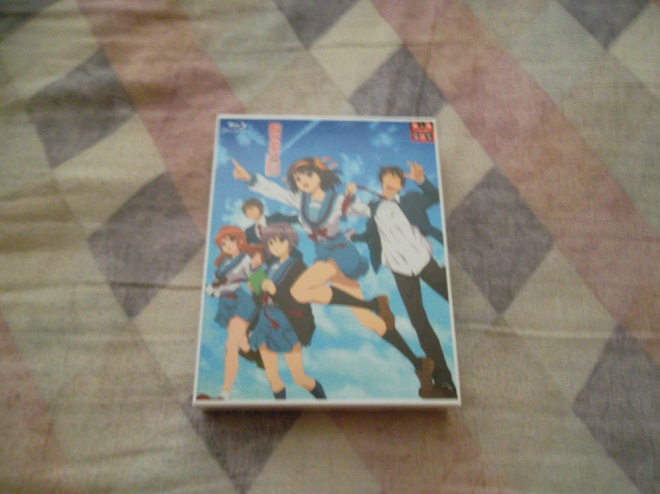 END_OF_DOCUMENT_TOKEN_TO_BE_REPLACED

This is the third in a series of posts translating transcriptions/summaries of the four stage panels at Kyoto Animation/Animation Do’s CTFK 2013 event held November 30, 2013. This post will be about the Producers’ Discussion panel detailing background information about the works featured at the event. The transcriptions/summaries for this panel come from these bloggers. Editing support comes from irrevilent. END_OF_DOCUMENT_TOKEN_TO_BE_REPLACED

This is a translation of the “Directors’ Dialogue” stage event held at CTFK 2013 in Kyoto, Japan. The attendees on this panel were Director Tatsuya Ishihara, (AIR, Kanon, Clannad, Chuunibyou Demo Koi ga Shitai!), Director Yasuhiro Takemoto (Full Metal Panic? Fumoffu, Full Metal Panic! The Second Raid, Lucky Star (episodes 5-24), Hyouka, The Disappearance of Haruhi Suzumiya), and Director Naoko Yamada (K-On! K-On! The Movie!, Tamako Market). The MC for this panel was Maiko Nishioka (Literature production and scriptwriter for Kyoto Animation). The transcript for this panel was provided by this blogger. Editing support comes from irrevilent. 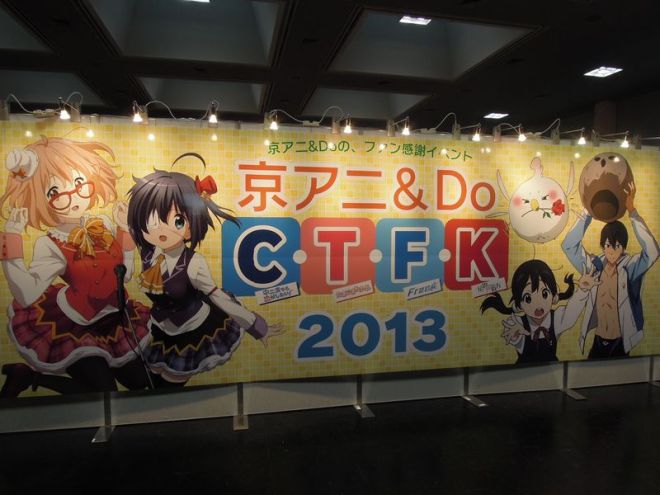 END_OF_DOCUMENT_TOKEN_TO_BE_REPLACED

Forgive the long title, but that pretty much sums up what this translation is covering. In 2011, the Japanese Cultural Affairs Department held an art festival in Kyoto from October 29 to November 23. On November 3rd, the local animation studio, Kyoto Animation, had three of its employees come to talk and give input about the company. I found a blog that gave a good transcript of the roundtable and thought people would be interested in a translation of it. (images used w/o permission from the owners) 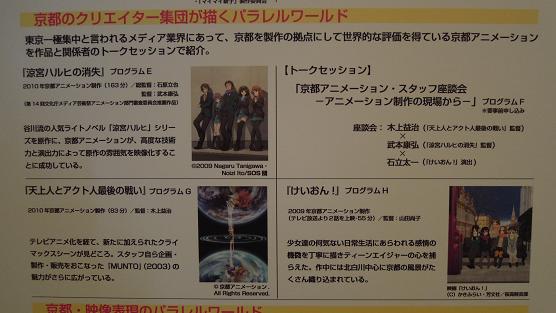