The latest edition of the Spoon magazine’s special edition, Cloud_G, had a big feature about the Chuunibyou Demo Koi ga Shitai! franchise; most notably featuring an interview with Director Tatsuya Ishihara about a multitude of things. Here is the relevant portion of the magazine (there was a discussion about “chuunibyou”, the OVA, and introduction to the series I excised). Big thanks to superdry, TMSIDR, and Goggen for proofreading this interview.

When did they inform the cast of Chuunibyou Demo Koi ga Shitai! there would be a second season? How will season 2 differ from season 1? What should we look forward to in the movie? And what will the new character, Shichimiya, do? We’ve come to the source, Director Tatsuya Ishihara, for a backstage report! 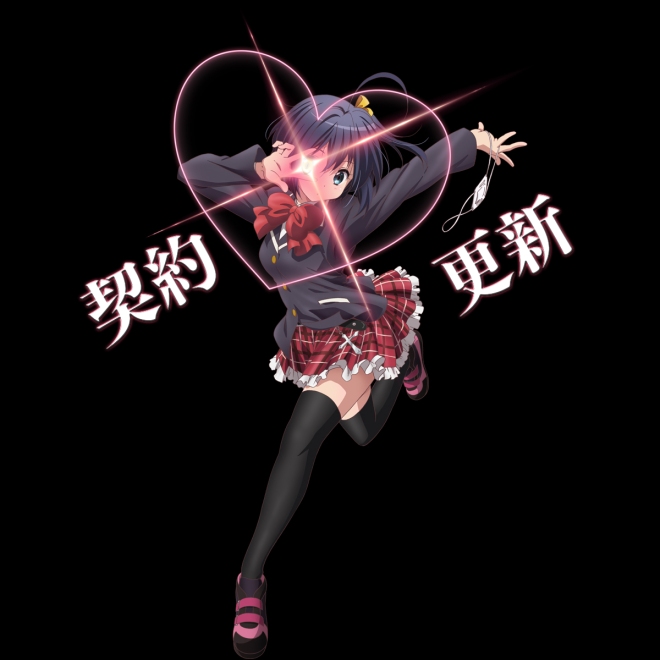 –That’s such a beautiful way to announce it. The cast thinks the series is over and then they’re informed it’s continuing just like that. Everyone must have been thrilled, right?
Yes. Everyone was overcome with joy.

–Is that so? That’s really surprising especially now that there is a second season.
I wanted the first season to, as they tend to say, “tie up nicely.” The second season would continue from the first season and tell a new tale. If I’m pushed to comment, I’d say that this tale wouldn’t be as serious as the first season; it’d be a bit more softer and gentler in feeling. In other words, I’d emphasize the romantic comedy portions more.

–When was it decided to make a movie?
The movie was talked about after we had decided to make a second season. We thought it would be a good idea that, if we were to make a movie, it would be able to bridge between the two seasons. We thought it would be appropriate to make a take that connected them just like we did with episode 13 on the final BD/DVD volume. We could do a new recording, but it wouldn’t be anything more than highlights if we didn’t add new animation. Therefore if I have to call it something, rather than say it’s a summary of the first season, it’s more like a fan movie.

–Still, I imagine the battle scenes look fitting on the big screen, don’t they?
Yes. They’re quite the attraction. We considered components like that when choosing scenes for the recap. Would the audience want to see things like chuuni battles on the big screen; would they find it vastly entertaining to see it there?

–Looking back on the first season, the narration during the final episode sounded quite similar to the narration at the start of a certain Japanese film.
XXXX, right? I also saw that film. While I was watching it, I thought I could insert something like that into the show as a base. When we first started making Chuunibyou, I was worried about occasionally switching to the chuuni battles. Should the audience be able to see them? Would they understand what was going on? And then it became needless worrying. Once we switched over to having them occur in Rikka’s mind, the audience would be able to see them and understand the joke. I was immensely relieved.

–Perhaps this meant that Chuunibyou vocabulary may be permeating the mainstream.
There’s so many individual chuunibyou phrases that would differ between individuals. I think it’s unlikely to say they’re permeating the mainstream audience. What we would call a chuunibyou phrase now was just a phrase that was influenced by a manga my generation read previously. You could think of it like we were just being delinquents. (laughs)

–The “Manga culture” was big, wasn’t it?
My generation are now people in their 40s who actively watched anime and read manga when they were children. Perhaps this franchise came about by taking those imaginary scenes and making them into visuals.

–In your generation, manga was a 2-dimensional genre you could become absorbed in. With the recent anime and live action era starting, and with seiyuu like Uchida-san (who plays Rikka) acting in games and anime, wouldn’t you call this the 2.5 dimension era?
That’s right. Today there’s a lot of seiyuu who have their eyes on acting in anime first. Perhaps we could say they have a high affinity to working in the medium.

–Uesaka-san (who plays Dekomori) also had quite the formative anime experience didn’t she? (laughs)
Yes, she certainly did.

–Surely you can call the current voice actors who grew up on shows you made the 2.5 dimension generation.
That’s quite the troubling use of words. You’re making me feel old. (laughs) Recently, our new employees have been saying they’ve loved the shows I’ve directed. However, that doesn’t mean that I consider our Chuunibyou cast to be too young. I find our NicoLive Chuunibyou radio shows to be immensely entertaining. (laughs) One could say their knowledge of the subculture is grand. They even know about things I would expect to have to ask if their fathers told them about it.

–There must have been a point in time where even Uesaka-san didn’t know about that.
The interesting part is we didn’t know about her interests. At the time we chose her to play Dekomori, we completely didn’t know that she was a Russian otaku or that she liked to wear lolita clothing. If we had known that, I would have definitely inserted more gags about that in the series. It was the same with Uchida-san as well. We had no idea she cosplays or had performed as other chuunibyou characters. Whether those types of people tried out for our show or if birds of a feather truly flock together, it was pure coincidence they were chosen for our series.

–Around the final episode, Dekomori changed her appearance greatly and showed about the same amount of depth in her character as Rikka did. What do you think was the reason that people became attached to her character?
Dekomori is the kind of character we could say that story with, so you sensed her changes more. Since she didn’t appear in the novels, we had a high amount of freedom with her. 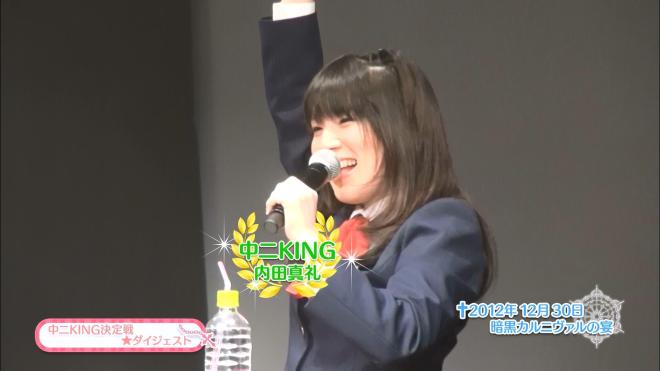 –Director, you went to see the fan events. Did the reaction there make you feel like the characters had become real through the seiyuu?
-It may be just Akasaki-san or Asakura-san, but today’s seiyuu’s popularity really feels like they could be called 2.5 dimensional. After all, idols are in 3 dimensions. 2.5 D is what you would get when idol and anime otaku unite for certain seiyuu. If you packed in all the idol otaku and anime otaku into one group, it’d easily be incalculable. While 2D and 2.5D are rather close, 2.5D and 3D are very far apart in feeling. That’s why it feels right to call this boom of seiyuu 2.5D, especially Uchida-san and Uesaka-san who feel like they’re always cast in anime now.

–It felt like the casting for the first season felt perfect. So, when thinking about the new character for season 2, Shichimiya, what are you contemplating when determining who to cast?
We’re currently in the middle of deciding who to cast, so I can’t say at this point. (laughs) Surely you are immensely worried about how to add a new person to a four person group who already feels complete. Whether you think about adding a new voice or someone who’s been around for a while, they won’t fit in with what’s already been completed.  So, when you don’t have a general idea of what you want to do at this point, we don’t know what to look for in a voice. It’s still unknown how big of an impact Shichimiya will have in the second season.

–The second novel really felt like the Shichimiya tale. I also think you have to include her in the anime.
Rather than Shichimiya joining the group in season two…….

–She becomes an antagonist?
If I’m pressed to say something, she’s that way due to being an opposing force for Rikka. 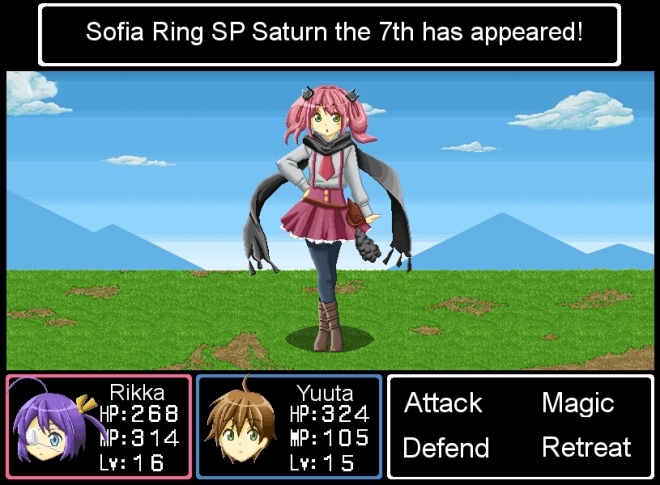 –So a rival. So will there be a new key phrase in the second season like the Invisible Horizon was in the first season?
Personally, instead of creating such a difficult theme for Rikka, I want to treat her as kindly as I can.

–Will you be depicting her ordinary daily life?
I want to tell stories about her that are relatively softer and gentler. Of course they’ll contain things like battles. I think it’ll move to that type of series where it switches over to more hijinx. I think concepts like the Invisible Horizon will still exist, but instead of being about her father’s death, there won’t be any serious component in them.

–So each episode in season 2 would be a show you could watch leisurely.
I think so.

–Perhaps we could say that the Invisible Horizon mentioned in season one would be a symbol of something that 2.5D girls born since 2000 are searching for.
Part of the charm of chuunibyou girls is that they are always searching for something. With Rikka as well, we’ve already accepted that this is one part of her appeal.

–Maybe it might be due to the support of Uchida-san and Uesaka-san that we can feel their charm. They seem to be searching for something more than what people are usually satisfied with and their fans also believe so.
There’s certainly many people out there who aren’t satisfied with a normal life.

–Finally, Dekomori is very popular in this magazine. Can you please tell us about how her hair will look in the second season?
It’s basically unchanged.

–She let her hair down in the first season. Was it just for that brief time?
That would be so. There might be small changes to her hair, but it’ll remain basically unchanged. The same will apply to the other characters as well.

–So what will be the message you want to include and communicate to the viewers in the second season?
I’ve probably remained chuunibyou all my life. The message in the final episode of season 1, “Resist Reality,” is a theme I’ve never said, but included. For the second season, I want to include a theme like I’ve lived. “For those who resist reality, continue rebelling, but let’s all search together!” I think that’s something that probably the people reading this magazine and people who love anime should do. Perhaps they can continue looking, but get the sense that they should look together with that person! (laughs) It’s a bit surprising and I’m not sure if it’ll actually be communicated.

–It would be nice if the viewers and the director continued watching the same screen until the final episode, wouldn’t it?
I’m not sure how we could do that, but I think it’d be a nice thing to do with the fans.