In April 2006, a reasonably popular light novel franchise by the name of The (blank) of Haruhi Suzumiya began airing its anime adaptation. Little did the producers know that the anime would become one of the top selling series of all time. The franchise became huge and a second season seemed inevitable. However, fate had other ideas in store. This post will detail how the Haruhi Suzumiya franchise has yet to receive a third season after selling nearly 100,000 copies per volume on DVD in 2006 (oricon miscalculations).

Picture yourself in July 2006. The singles for Haruhi Suzumiya are selling insanely well. God Knows… is being sung in karaoke booths around the country. The first DVD literally sold out in Akihabara. Novels are being printed at an astonishing pace, including the newly released 8th novel which had a first pressing of 150,000 copies. Kadokawa Shoten (both Publishing and the Video division then called Kadokawa Herald Pictures) and Lantis are soaking up the profits from a mega blockbuster. Fans love Haruhi all around the world and they want more. Sometime this year, the SOS Brigade production committee (Kadokawa Shoten, Kadokawa Pictures, Kyoto Animation, Klockworx, and the new member Lantis) will meet and green-light a second season to be announced on July 7th, 2007. This second season will focus on the fourth novel of the franchise with other episodes detailing the second novel and short stories from the third and fifth novel that were left out from the first season. Scripts are in the process of being written… and then something changes. 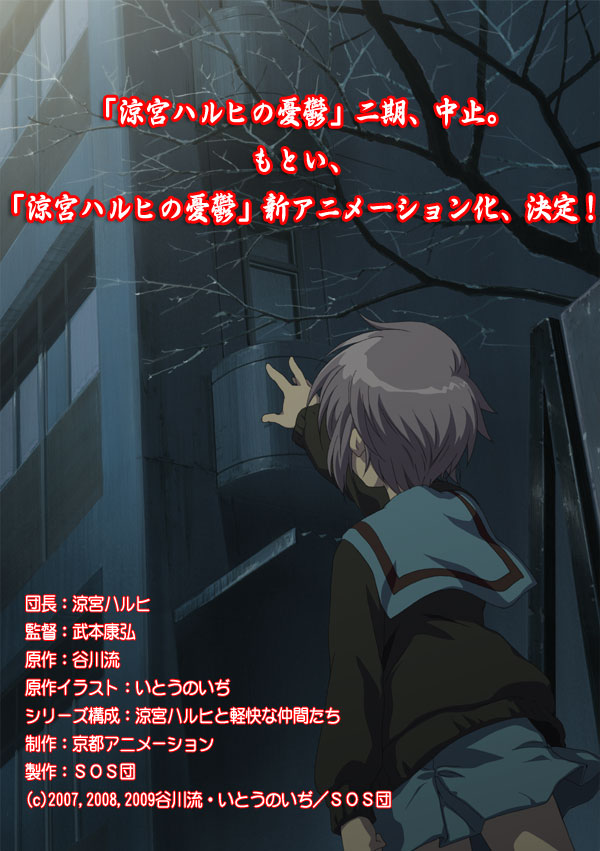 We’re now in December 2007. Nothing is directly said to be the cause, but at some point in the summer of 2007 the plans for a second season of Haruhi Suzumiya are scrapped and instead Disappearance is altered to become a movie instead of the focal point of a second season. Instead of airing S2 in spring 2008, the new episodes are delayed until spring/summer 2009 in a “re-airing” of the first season while Disappearance is planned for a movie release in February 2010. This is the cause for the delay in new animation for Haruhi, but there’s something else happening at the same time in 2007.

The ninth novel in the franchise, The Dissociation of Haruhi Suzumiya, was released in April 2007 and ends on a cliffhanger: “to be concluded in The Surprise of Haruhi Suzumiya“. This novel was originally planned to be released in June 2007 to conclude the tale, however, Nagaru Tanigawa ends up delaying the novel to an unspecified date. No additional stories are released in 2007, 2008, or even 2009. Yet the novels continue to sell very well (4.5 million copies in print in early 2009).  A spinoff manga, The Melancholy of Haruhi Suzumiya-chan, was created in 2007 and promoted later in 2009 via web-anime shorts on YouTube (and with the original second season). This sells very well for Kadokawa in both manga/disc form. Another spinoff manga based on the fourth novel, The Disappearance of Yuki Nagato-chan, is created in 2009 to be promoted with the movie.

Time passes with the new animation project, web shorts and movie eventually being released and we’re now in mid-2010. To promote the novels along with the movie, Kadokawa re-releases the 9 novels in a panorama cover edition with 9 new covers drawn by Noizi Ito. No new novel is announced even 3 years after Surprise was supposed to be released. The spinoff manga are selling well. The BD-Boxes and movie video release sell very well with the TV series BD-Box having a printing of 50,000 units.  Yet it’s only in December 2010 that we hear Surprise is finally being released. It’s scheduled for a “worldwide release” in May 2011 (6 month delay due to translating; “worldwide” being Taiwan, Hong Kong, and South Korea).

In 2011, Kadokawa promotes the novel like no other light novel was promoted before. Trailers around Akihabara, advertisements in nearly all their magazines, commercials, store displays, midnight sales, you name it. With a record 513,000 first pressing for the two-novel limited edition, Haruhi appears to be back. There’s only one problem’s left: what’s coming after this? Tanigawa hasn’t submitted any more stories beyond the short included with the LE. The manga don’t need promotion. And then KyoAni’s plans were finally revealed to the public in December 2011 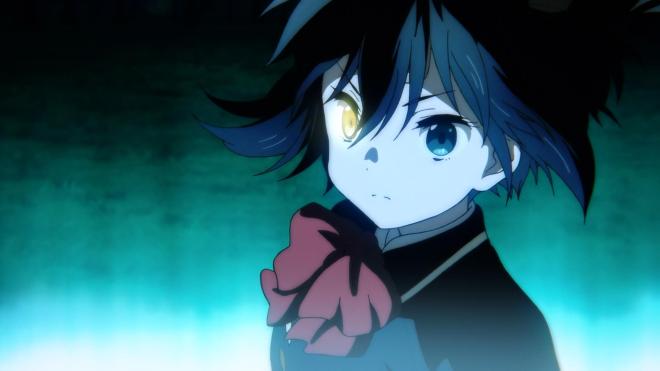 In 2009, Kyoto Animation decided to hold an award for submitted light novel, manga, and scenarios to animate. In 2010 they decided to publish one of these submissions and animate it. That submission: Chuunibyou Demo Koi ga Shitai! (see blog for TLed novels 1-2). Concurrently, they also decide to make an original franchise under the supervision of their second biggest show, K-On!, director: Naoko Yamada. This takes away one of the big supports for the Haruhi Suzumiya franchise (the animation from Kyoto Animation).

However, losing KyoAni alone is not enough to prevent the franchise from being animated. Plenty of other series have switched animation studios and done well. The problem lies elsewhere.

Again, we’re still in 2011. Surprise has come out and done well, though not as spectacular as hoped (423,000 LN sets sold is nothing to be ashamed of). The manga series are selling well without any special promotion and Tanigawa still can’t submit any stories. What’s to promote? Therein lies the real cause of no Haruhi Suzumiya season 3: Kadokawa, who makes anime to promote their own publications, has nothing left to promote for the Haruhi Suzumiya franchise and no support from the main animation studio. In addition, the main producer for Kadokawa that works with KyoAni, Atsushi Ito, is demoted from head of animation production likely due to backlash from fans in Nichijou and his inclusion of Minoru Shiraishi in many shows/bonus footage (See edit below for more information). Without Ito, it’s unlikely anyone will push for more Haruhi. There’s other unknown franchises that can be promoted via anime materials and earn much more revenue for Kadokawa than Haruhi, so why waste resources on it? Nothing new’s coming out.

And that’s the reason for no more Haruhi. It’s not Hirano, it’s not Goto, and to some extent it’s not Shiraishi. It’s the fact that Tanigawa can’t consistently write the story enough for Kadokawa to promote the novels more. Two books in 4 years doesn’t lead to anime production. Other factors include KyoAni moving to their own IPs and the demotion of the producer of the show, but if Tanigawa had written more, we’d be seeing Haruhi S3 by now.

As I alluded to earlier in the poster, there’s no reason to promote the main novels anymore. In 2013, there were enough volumes of the Yuki-chan manga to be animated and the head of the Kadokawa Shoten animation division decided to animate that series. Also as I mentioned earlier, there was no reason for Kyoto Animation to animate it, and as such the production switched studios to Satelight and had a new main staff to work on it. This does not mean a third season is likely; only that it’s advertising the Yuki-chan manga instead. No new novel has been released in the Haruhi franchise, though a short story was released in the second artbook in May 2013. Since then, that’s it for the franchise.

Edit: In response to a comment about the issues with Producer Ito and Minoru Shiraishi, I’ll expand on that situation. Ito was the main producer for all of the Kadokawa/KyoAni shows (Full Metal Panic!, Haruhi, Lucky Star, Nichijou, and Hyouka). He and Shiraishi first met around the time of the first Haruhi broadcast and Shiraishi was brought back and had a big role in Lucky Star. The JP fans liked him in the Lucky Channel segments, but he got placed as the singer for the second cour’s EDs in live-action footage in an expanded role. Additionally, Shiraishi was focused upon in an video extra “The Adventures of Minoru Shiraishi” featured on 11 of the 12 DVDs. During the next Kadokawa/KyoAni production, Haruhi-chan, he was featured as “Oniguchi” in the CMs and bonus footage and even had an autograph session. The 2009 Haruhi DVDs had Shiraishi accompanying the group on the location scouting feature, Shiraishi’s own Taniguchi Goes! feature, and a voiceover feature as Taniguchi on each DVD.  Additional bonus features were made for the Haruhi and Haruhi-chan BD-boxes again focusing on Shiraishi. The Disappearance movie BD had an extra showing the filming of Minori Chihara’s music video and Shiraishi showed up in that! During early 2010, he was given his own web show to race go-karts called Lucky Racer (spun off of Lucky Star) to promote other Kadokawa (and other associated companies) properties. By this time, there was a growing sentiment against the guy as it wasn’t just KyoAni shows he was focused on (Gai-Rei and Kiddy Girl-And also had Shiraishi bonus features, but he was cast in every Ito show). The final straw came when he was cast as Sakamoto-san in Nichijou, had a character song single, and was featured in location scouting/bonus footage AGAIN.  Ito used him constantly and fans got sick of him over these three years. Thus Shiraishi wasn’t cast in Hyouka and the future special shows had other talent participating instead of him.

As for Ito, during Nichijou he was listed as Video Media Department Vice President/Animation Division Head/Project Planning Section Chief. In the following year during Hyouka, he was only listed as a producer. It’s not a secret that Nichijou was a disappointment on video disc sales for Kadokawa and music sales for Lantis (it did well for manga volumes and introduced a new manga magazine). He took the blame for that and was demoted afterwards.