This is the final week of Gifu Broadcasting’s re-airing of KyoAni’s Spring 2012 series, Hyouka. For the past ten weeks, I’ve been translating the staff comments with each week’s episodes. Today finishes the final two episodes!

Nishioka here. I was the scriptwriter for episode 21.

What did everyone think of episode 21? It’s Valentine’s Day, so it’s got to be a girls’ festival! So I thought I’d convey their cuteness a bit. “Valentine’s… What were the children feeling back then…hmm…” And so I frantically looked into my past for ideas. They’ve already become distant memories… (far away look) Right now the current trends are to enjoy purchased chocolate. Making it by hand is too difficult! No one wants to follow Mayaka and Eru’s examples!

With all the components in this episode, it was quite difficult to write. Everyone’s own feelings go around and around in the atmosphere. It was important to convey each one of their thoughts. Especially Satoshi’s. This is the first time we’ve seen Satoshi act fishy since the cultural festival.

Though it might overload you at first, each character’s actions and expressions are representative of their feelings this time. If you watch it again, you might enjoy it even more noticing more things.

It’d make me happy if everyone enjoyed this episode even just a little. Thank you for watching!!!

This is key animator Fuji.

Hello everyone. This is Matsumura, the in-between checker for episode 21.

While I love how cute each of the Classics Club members are, I absolutely love how cute Sawaguchi’s hairdo is. Don’t you think her three dango, three braids, and ribbons are cute?!

I look forward to meeting my Sawaguchi-style brethren!

This episode’s mystery was the disappearing chocolate. As you watch the episode and read everyone’s expressions, you start to think “could it have been…?!” This is a somewhat pitiful episode, but one whose contents is appropriate to enjoy as we enter the final stages of Hyouka.

Episode 22: The Doll that Took a Detour 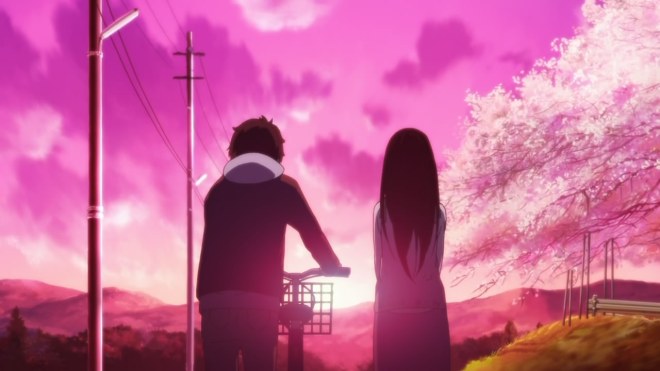 We’ve reached the final episode.
As we’ve walked through the year with the Classics Club, we’ve finally reached this point.
It’s a somewhat happy and yet sad feeling at the same time.
Their anime story ends here, but their lives are just starting from this point.
What kind of high school careers will they have?
What kind of lives will they have?
Thankfully each member of our viewing audience will be able to draw their own future from this final scene.
To everyone who watched, I thank you from the bottom of my heart.

Those final sensations swept over me and I was able to get excited for this final episode!

Houtarou as an umbrella carrier.. I had these thoughts in my head as we finished the design: “Ah… This look definitely clashes with his hairstyle…good…good.”
When you watched the episode…at that momemt…were you surprised? Not?….Maybe…Possibly…
…is that how you felt at the end?

Houtarou…
was completely enchanted by Eru’s doll appearance… He was so lovely to see captivated…
It was troubling to combine that lovlieness with the stylistic hairstyle that a doll has to wear.
When our photographers helped match that look with the atmosphere, the final product looked wondrous.

During the latter half of the show, as we reached this point, Houtarou and Eru started to become aware of each other’s feelings. It was a bit embarrassing for me to work on these episodes. Especially around Houtarou. Should I gradually have his expression become softer throughout the episodes? It really pleased me to see the entire staff pour their love into this show.

And then episode 22 arrived.
Sakura season began and then the entire staff poured all of their love into that final repeating sakura final scene.

For everyone who watched and who followed us throughout this long season, thank you so much for watching! 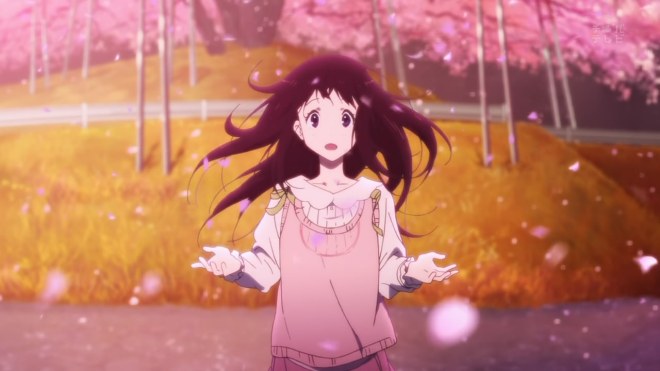 This is one of the photographers for episode 22, Nakagami.

It’s the final episode.
And for this final episode, all the accumulated feelings were puttered out into this one episode. “Puuu”!

That’s shown by how effective our filters became.
You can see their effect in the final product.
Hyouka is bitter! Bitter! Bitter! Bitterrrr! Bittersweet!!!, so we’ve had to restrain ourselves from feeling too excited.
It’s been going on for half a year. Come on Supervisor!

And then we were completely free.
We were released.
Ah~freedom is so sweet…

And so we thank everyone who watched us very very much. We can look back at images of a story packed with adolescence.

And that’s how it is.

This wraps up all 22 episodes of Hyouka. I’d also like to thank everyone for reading over these past 11 weeks. It’s been an extreme pleasure to translate these comments and I appreciate everyone who’s viewed them and/or commented. It’s always encouraging when your work is appreciated. I’ve got some good projects coming up, so look forward to seeing them come out.