Welcome to another batch of staff comments from Kyoto Animation regarding their spring 2012 series Hyouka! Gifu Broadcasting is re-airing the series during this season 2-episodes at a time and I’m playing along by translating the comments from the KyoAni site. This week: episodes 5 and 6!

Episode 5: The Truth of the Historic Classic Literature Club 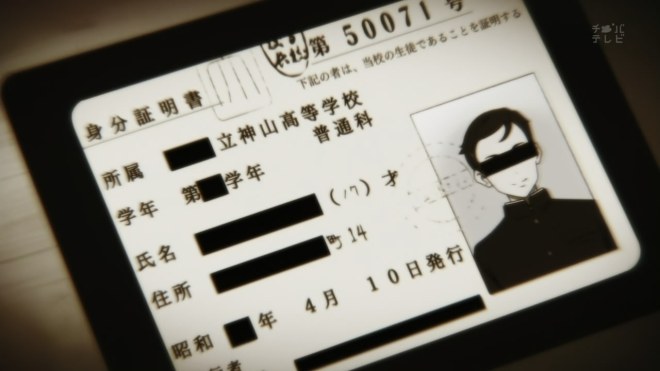 This is Miyoshi, the director and storyboarder for episode 5.

I have a sudden confession to make. To me as I was directing this portion of Hyouka, I was also trying to solve the mystery stuffed into the anthology just like the characters. It was a “Participatory anime.” The audience weren’t the only ones who were trying to solve this mystery, we staff were also feeling nervous about what would happen if we didn’t figure out the solution.

The mystery itself, the “Significant Hyouka Incident,” occurred at our studio. It had already begun the morning I sat at my desk to begin work on the storyboards.
The character sheet for the important person entangled in the Hyouka mystery, Jun Sekitani, had disappeared from the top of my desk.

There was an uproar! The staff went into chaos! Was it really lost? Could someone have really taken it?
Director: “Hey you! Where are you hiding my sheet?”
AniDir: “I’m innocent! (Grr)”
The mystery thickened.

Even so, the one person who knew the truth behind this event was not far away.

Supervisor: “Ah, Jun Sekitani, right? Actually, since he wasn’t going to appear in the show, we never settled on an image for him. (laughs)”

Ah, I see now. So that was what he wanted, huh? So there was never a Jun Sekitani sheet on my desk to begin with… If that’s the case, then my memory up to now must be incorrect… no, I was acting like an idiot… And so that was the scary “Significant Hyouka Incident” inside KyoAni.

And so from that, I directed the fifth episode through the perspective from the two women who knew Jun Sekitani: Eru Chitanda and Youko Itoigawa. Through their memories of how he was in the past, we were able to view him.

Though his memories were brought to the surface in this episode, the image of Jun Sekitani was still very faint. Each of the women had subtly manipulated their own memories to think of him how they wished. I was curious if the real person would differ from how they viewed him. Perhaps we should say “It should lose all subjectivity if you’re going to treat it from a historical event in your anthology.” Due to the two women, I was not able to capture Jun Sekitani’s image. 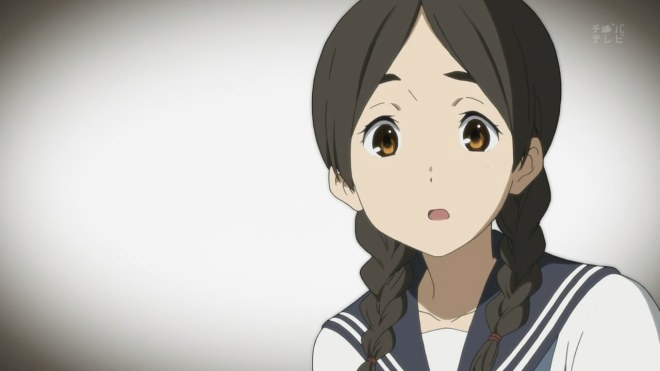 This is Yukiko Horiguchi, the animation director for Hyouka episode 5.

Since this is the final episode in the Hyouka arc, I was very nervous while working on it. As the pressure rose , so did the percentage of lines re-done (due to my anxiety). I’m sure it was a bother to the key animators. (sweats). Forgive me.
Personally, I really enjoyed drawing Mayaka as well as the younger versions of Youko-Sensei. I think the key animators were able to create a lively sense from them.
And the director’s style was amazing. (laughs) He certainly puts a lot of love in it.

Regardless, this episode sums up and solves the mystery present in the episodes prior to it. Because it’s the final episode, it puts a lot of stress on our drawing, but thankfully everything went smoothly and turned out well. What did everyone think?? I’m pleased if everyone enjoyed it even just a little. Personally, my highlights were of the apprentice and Houtarou. （＾＾） That’s just my own favorites, really. (laughs)

And so the Hyouka anime series will continue onwards from here. Please enjoy it! 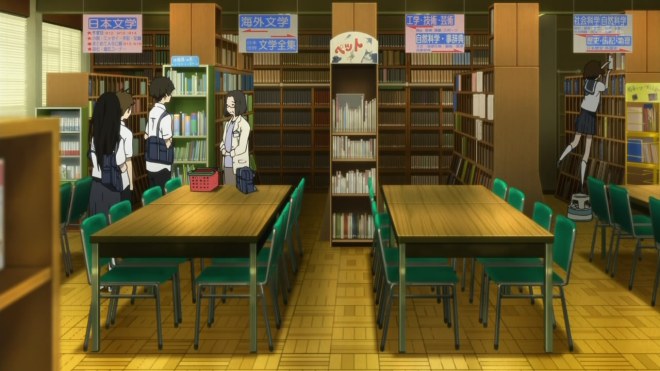 This is one of the key animators for episode 5, Watanabe.

What did everyone think of this episode?

We try to build up the atmosphere in every scene too. We’re pleased if you notice things like Houtarou acting differently around his sister and showing a side that the other Classics Club members don’t see or Mayaka’s actions in the library. We’re obsessed with showing each character in a scene acting/emoting properly for that place.

For me personally, I wasn’t tasked with many of the Classics Club member scenes, but I was in charge of Eru’s reflection scene (her character design images are so cute!). I was a bit inexperienced with this type of scene, so I gave it my all through trial and error.

This episodes ends the titular arc of the show, but the Classics Club will continue to solve mysteries and converse next time. I hope you enjoy the show. Please continue to watch it. 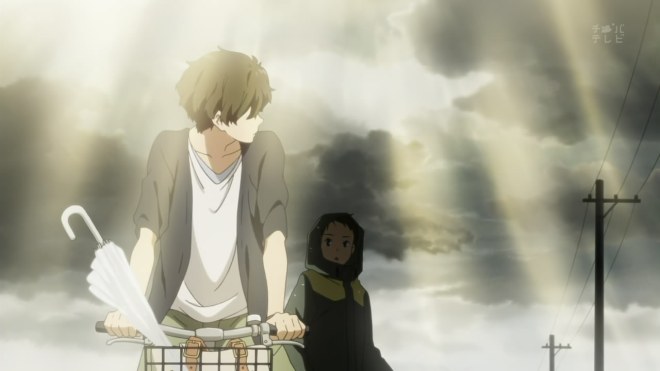 This is one of the photographers for episode 5, Ueda.

What did everyone think of the conclusion to the original novel Hyouka? We used a lot of filters and CG in order to bring out the emotions and feelings for the Classics Club members. Reality effects would be present and then disappear suddenly…

We put in a lot of filters and effects in scenes like the conversation between Houtarou and Satoshi on the way back from the Chitanda household, memories of what the meaning of “Hyouka” represented, and so forth. We wanted to make sure we conveyed the feelings from Jun Sekitani’s past. Were we successful?

We temporarily stop the flow after this episode, but we’ll continue onwards with more entertaining episodes. Everyone, please watch and enjoy~!

Episode 6: To Commit a Grave Sin 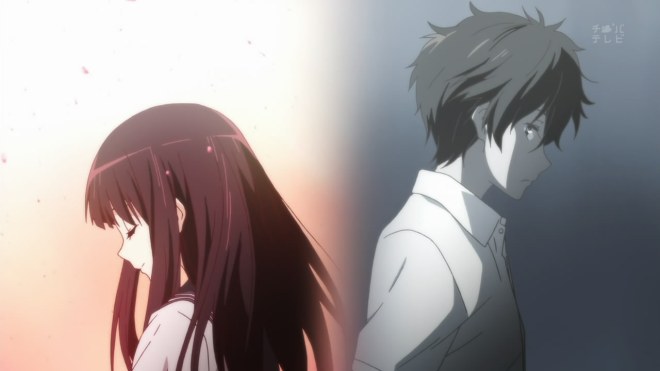 I’m Sakamoto and I was the director/storyboarder for episode 6.

Eru: “I can’t stop thinking about what’s on top of Omichi-sensei’s head!”
Houtarou: “I have no idea. Go look above him to see.”
Eru: “It would be troublesome if I did that.”
Houtarou: “Oh…(sigh) People said he hasn’t changed, so perhaps it’s what was on there last year…”
Satoshi: “That’s unlikely Houtarou. Omichi changes what he wears each year with something new.”
Mayaka: “Why didn’t you think of that before you said anything? Use your brain. Well, it is your head. (half smirk)”
Eru: “Mayaka-san, were you joking just now?! Irregardless, I’m very interested in his head. I want Oreki-san to tell me what he is concealing on his head. A teacher must not keep secrets like that.”

And so the Classics Club trespassed onto Omichi-sensei’s holy grail…. Yes, they truly committed a grave sin.

What did you think of this conversation that didn’t start episode 6? BTW, there was no background story like this… I do not know if there was anything on Omichi-sensei’s head at all.

So, I tried to make this episode’s imagery (the mannequin portion) a bit comical. Up until the previous episode, they had all had a serious feeling to them, so I thought why not break it a little bit?

Also, the other piece of imagery (Chitandel) had a more realistic face when she was first designed…. we made the right choice to distort her, right? (sweats)
There was so much talk about how cute she was it was scary (laughs) but if that’s what they’re saying, then we were successful.
The image of Eru that Houtarou portrays of her is also like this. She’s viewed in many different ways throughout this work where words wouldn’t convey their intent.
The images used in this episode are cute…but mean more, you know?

Regardless, this episode is a tale where Houtarou again measures the distance between himself and Eru. Or in other words, he may be going further towards a rose-colored high school experience. Still, there’s a small distance remaining between the two.

How will Houtarou’s view of Eru change after this episode? Enjoy watching to find out. 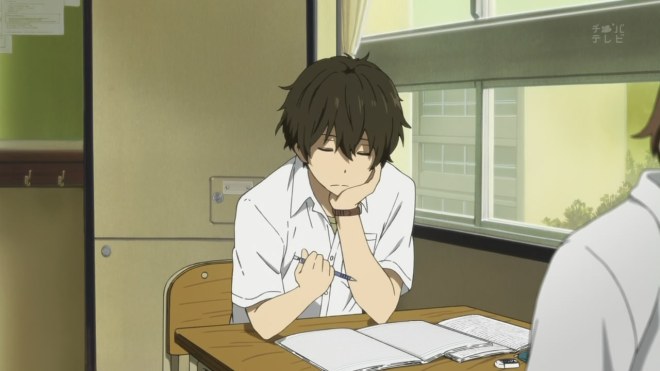 I’m Sezaki and I was a key animator for this episode.

Episode 6 was a break after the “Hyouka” incident where we could use one of the short stories.

We began a bit unusually with a lesson scene, but I was pleased with how cute Houtarou looked when he was drowsy and playing with his pencil.

I was tasked with the scene of Eru’s class during her recollection of that day’s events (it was difficult to draw all the various mannequins).

Since they have no facial expressions, I considered expressing their emotions through poses/movements. Since we don’t usually express feelings this way, it was a fun way to draw characters.

Next time feels awfully summery. There’s still many more fun episodes to come, so we’ll be pleased if you enjoy watching until the very end. 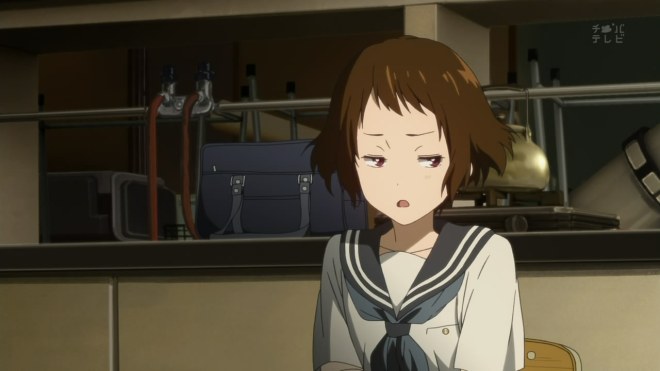 I was the in-between checker for episode 6, Negi.

Hyouka is not a show with many showy movements; it’s filled with everyday motions. When we check the in-between frames, we take great consideration of that fact and the amount of lines on each frame. It’s a large amount of work for the in-betweeners and checkers.

The 6th episode was the first episode of Hyouka that I checked, so I made sure to approach it with fighting spirit.

Personally, Mayaka makes my heart swoon, so I hope you enjoy her angry yet cute (and really gentle) movements.

And so ends probably the longest set of staff comments I’ve worked on. Thanks to everyone who made it this far! Here’s to the hot springs inn and the start of the “Fool” arc next week!