Welcome to another week of the Haruhi Suzumiya re-viewing. As always, Yumeka (from Mainichi Anime Yume) and Goggen (from K-On! blogging) will join me as we re-watch the two episodes that are airing on AT-X this week. This time, we get to solve a mystery and begin another one. (Hyouka time?) Let’s continue the path through the third novel of the franchise: The Boredom of Haruhi Suzumiya. (Yumeka – Haruhi, Goggen – Mio, ultimatemegax- Koizumi; Disclaimer: each of us watches the episodes and writes our own comments without seeing the comments from the others.) 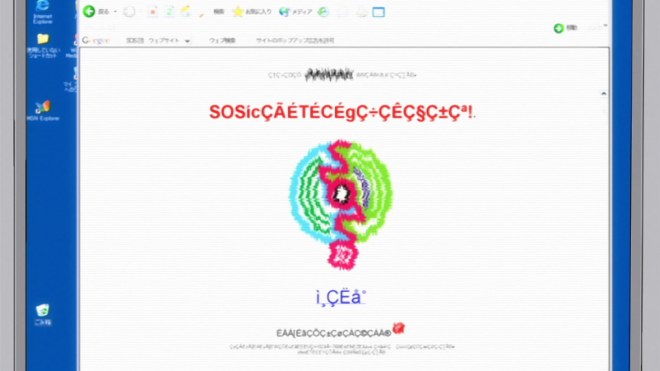 Mysterique Sign is one episode I don’t have much to say about. It introduces Emiri Kimidori, a character who seems insignificant at this point, but is revealed in later stories to be more than she appears to be. This episode is also heavy on the sci-fi, with the SOS Brigade’s whacked-out logo, the giant cave cricket, and Itsuki and Yuki getting to use their powers. Aside from that, there’s really nothing else to say about it other than it being an average little mystery-solving story involving the whereabouts of the computer club president, with some funny and exciting moments. Like Boredom, it’s not one of my personal favorites, but there’s nothing bad about it either. 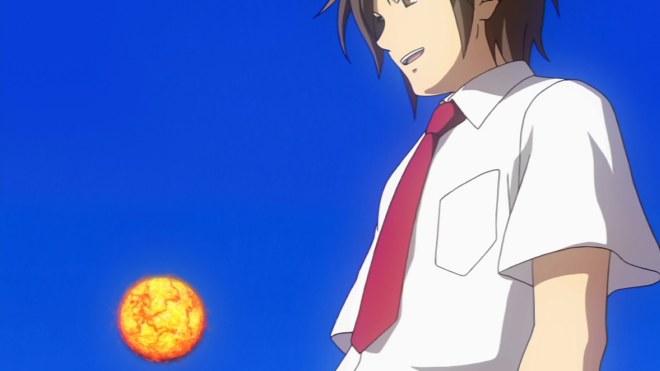 And we come to one of my least favorite short stories in the franchise. Mysterique Sign is meant to remind us about the powers of Haruhi, Nagato, and Koizumi to break up the slice of life aspects. Anime-wise, KyoAni did a fanstastic job animating the fight with the cave cricket. Koizumi’s attack names and the text pop-up helped liven a fight that wasn’t nearly as good in prose format. Again, they continue to favor Nagato by having her put up a barrier after the cricket jumped at the Brigade members (not in the novel), but I can’t complain too much. The other aspect is to introduce one more character to our bunch: Emiri Kimidori, who surprisingly got a character song CD. There’s not much to say about her except she continues the whole “mystery” aspect. Music-wise, it’s alright but not some of Kousaki’s best work. Passable. 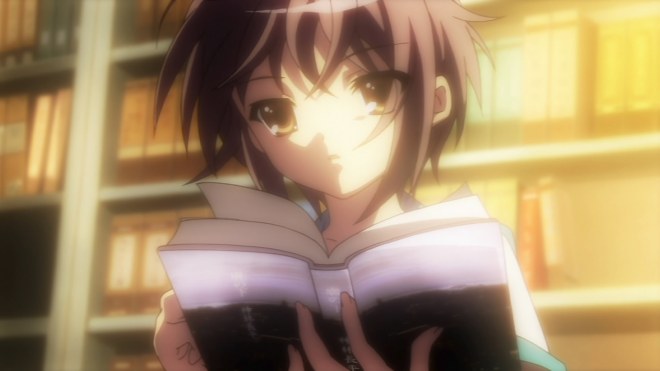 This has never been one of my favorite episodes, but it is interesting for a number of reasons. For one thing, it’s the first and only episode to feature Emiri Kimidori, whose motives in this episode remain a mystery – in the anime, at least. Secondly, Itsuki Koizumi vs. the giant camel cricket is a fun little battle scene, if only because it’s a rare opportunity to see our friendly neighborhood esper in action. Also of note is the creation of the SOS Brigade emblem, making its debut in this story. One thing that has always felt a bit off to me in this episode is the pacing, specifically in the final scenes. The camel cricket fight feels like it’s the climax, but once it’s done with, there’s still ¼ of the episode left, which deals with exposition and backstory. This is no doubt the result of KyoAni’s devotion to the source material, and there’s nothing wrong with it – it’s just unusual for an episode of a TV series to end with five minutes of exposition, after everything has been wrapped up. But then, this is an unusual series. 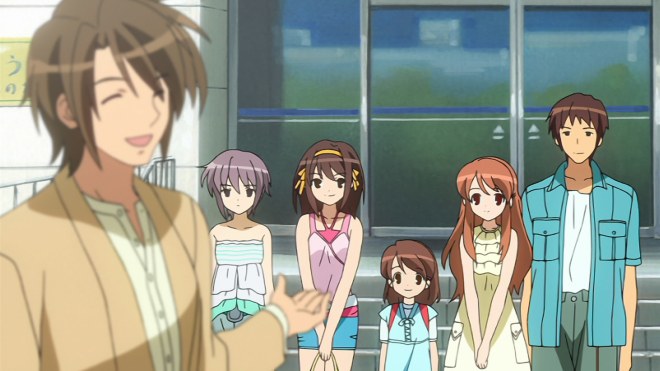 So, at this point we’ve seen high school comedy, time travel science fiction and various supernatural concepts. Now, it’s time for the big mystery episode – or rather, the build-up to the big mystery episode. For most if its running time, Part 1 is about of a group of high school kids going on an exciting trip and having fun. I know not everyone cares for some of the story changes made for the anime adaption, such as having Kyon’s sister join the group for the trip. Personally, while I don’t quite see the point of it, I can’t say it bothers me. She doesn’t really have much of an impact on the story, she’s just there. Other than that, I don’t have a lot to say about this episode – it’s light, charming fun, but the real payoff comes in Part 2 next week. 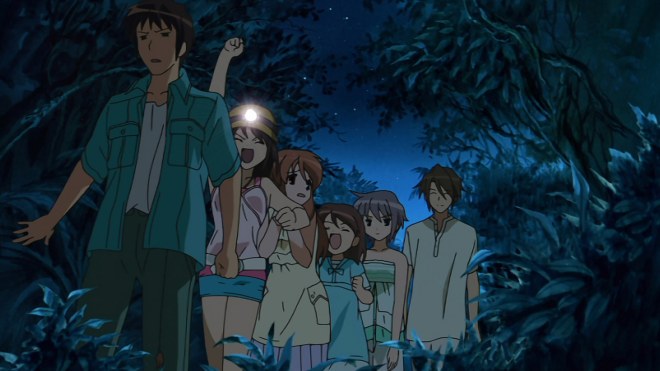 I’ve always liked the Remote Island Syndrome episodes; the mystery aspect is played out very well (before we realize it’s a prank) and there are a lot of good character interactions to be seen. This two-part story is also the most changed in the anime adaptation (which still isn’t that many changes), two of the most prominent being the fact that Kyon’s sister doesn’t accompany the group to the island (guess KyoAni really wanted to market her as a character) and a funny scene where the SOS Brigade get served wine and became three sheets to the wind to say the least. But even with some slight changes, the anime version has its own charm. While most of my favorite scenes are in part 2, I enjoyed seeing the characters having fun and being their amusing selves in an environment besides North High. The tension at the cliffhanger end of this episode is also the most we’ve seen since the finale of Melancholy, so it was a great way to end part 1 and remind us that the series can be serious when it needs to be. And like Kimidori from the previous episode, Arakawa, Mori, and the Tamaru brothers also appear to be one-time guest characters now, but we’ll see them again in later stories. 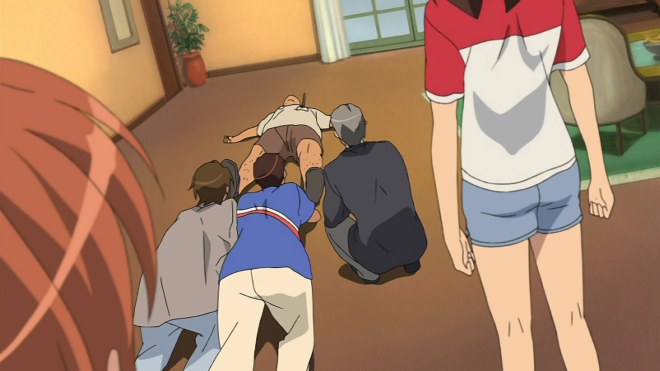 Following the previous episode, we divert even more from the novels by having Kyon’s sister along as well as a night-time full of alcohol-free activities. I think the additions work well here. They help set up a later story while remaining entertaining in their own right. The addition of the mysterious woman at the beginning of the episode adds a nice touch to the beginning conversation. With the typhoon suddenly coming in, I wonder if Koizumi and the Agency planned the “activity” that morning or if they had it on contingency if Haruhi made the weather poor for outside activities. I’ll give Ishihara and Yamamoto credit for ending the episode at the discovery of the dead body. It ends the episode with a great revelation in contrast to the light-hearted aspect of the remainder of the episode. What? We’re not ending the mystery this week?